Here you will find changes and news to the site, from 2019 onwards. 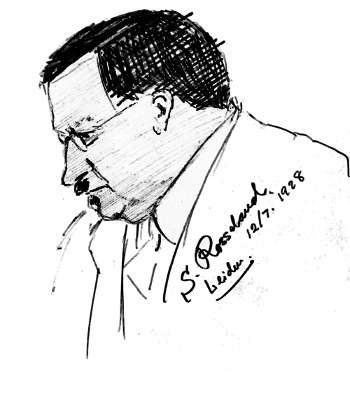 This website is dedicated to the memory of the Swedish pioneering astronomer and humanist, professor Knut Emil Lundmark.

The site was established in the spring of 2012 as part of the 75 year anniversary celebration of the Astronomical Society of Tycho Brahe. This is a society for astronomy devotees based in Lund and Malmö in the South of Sweden, a society that Lundmark founded in 1937.

In 2019 an upgrade of this site was done with additional information and a complete English version for international readers.

Knut Lundmark was a polyhistor in the best sense of the word. His unusually broad knowledge base is often mentioned in descriptions of him: professional scientist, a pioneer especially within galaxy research, but also deeply fascinated by the basically democratic mission to bring the new findings to the general public, as well as by the long history of astronomy.

Lundmark's contacts within cultural life were impressive and for the Swedish people in general he became more known as a cultural person and missionary for astronomy than for his scientific pioneer research. Born as a poor farmer boy in the north of Sweden he became widely known as a learned professor in the university city of Lund. He was thus generally considered to be the person to ask any astronomy-related questions.

The main emphasis for this site lies on documents, facts and illustrations focused on his life and achievements. Under each thematic tab we present hopefully relevant and interesting information.

This website should be considered as an on-going and developing project, a continual process into which new material is added as it emerges. An upgrade took place in 2019.

The main responsibles for the material are Ulf R Johansson (astrohistorian) and Peter Linde (astronomer). They appreciate any comments on the site and additional material about Lundmark. The tab "Contacts" contains relevant email addresses. Tips: Most images are clickable. Latest changes are found under the tab "News".