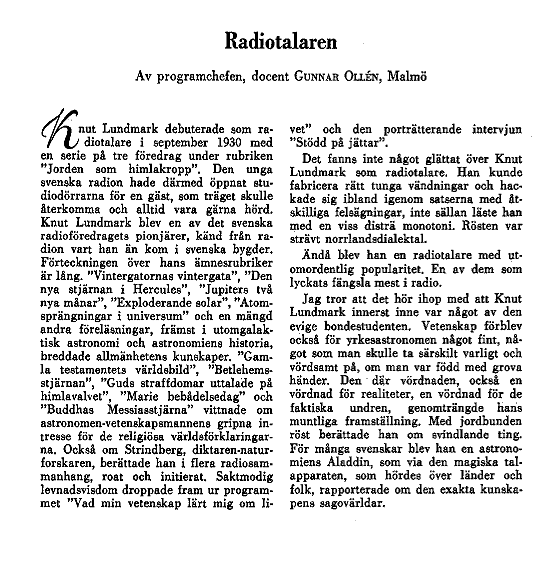 Knut Lundmark was an engaged advocate for his science and its history. This could be noticed on all levels: He wrote popular science in the mass media of its time, newspapers, magazines, he published popular science books, traveled around the country making speeches on astronomy for the public – and furthermore he was busy in the new media, radio.

Gunnar Ollén, legendary director for Swedish Radio in Malmö, later also TV-director, told in a memory book 1961 about how Lundmark was as a radioman (right).

In a unique talk show Lundmark and the Nobel prize winner in literature 1974 Harry Martinson (the forthcoming creator of Aniara (link: https://en.wikipedia.org/wiki/Aniara) debate current astronomy under a headline called “A tab of the Universe”. Martinson asks, not so little pessimistic and abject in relation to mans place in a desolate and vacuous universe, Lundmark replies and straightens out. Martinson is insecure on behalf of man in this eternal cosmos. Lundmark feels at least partly at home, but is distrustful about the newest cosmology, which in time and space limits “his” universe.

In Lundmark's bequeathed papers you can find among other things this hand-written manuscript for a radio seminar , which has never been published.