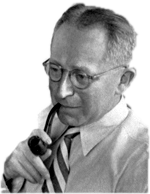 The battle about whether measuring of movements within the spiral nebulae could be done, were the alpha and omega for the outcome of how the new “astronomy of the galaxies” would be established in the 1920s. If there were measurable movements of the stars within the nebulae it was likely that the spiral systems were close to us, they could even be a part of the Milky Way. But if there were no movements it was more likely that they were located outside the Milky Way, on gigantic distances. Adrian van Maanens name is for ever linked to his measurements of the objects M33, M81 [objects in the famous Messier Catalogue] and other spiral systems in which he found weak, but still evidence in movements. We talk about a one hundredth or a one thousandth of seconds of arc. If these movements by stars in the spiral arms were real stuff, the objects must be close-by in astronomical terms – were they located far outside our home galaxy and were other “island universes”, they must rotate with absurdly high speeds.

Knut Lundmark gave himself the mission to countercheck the measurements by van Maanen – with the same photographic plates, the same stereocomparator in Pasadena. It was a careful and laborious job and in a couple of heavy reports – in the first Uppsala-paper 1927 called Studies of Anagalactic Nebulae

– the whole discussion is scrutinized in rather moderate terms, a discussion that eventually closed by the invalidation of van Maanen’s measurements.

There are a line of documentary versions about this fight, both on the net and in the literature e.g. in Richard Berendzen/Richard Hart/Daniel Seeley’s Man Discovers the Galaxies (1984). Many have tried to explain van Maanen’s measurements, if he was a victim of delusion and why he so long was defended by his friend, the Harvard astronomer Harlow Shapley. Lundmark’s measurement gave quite another result, but still not a result disastrous for van Maanen.

However Lundmark suspected several inadequacies with the plates, in the measuring techniques etc. Over time Harlow Shapley became a close friend to Knut Lundmark, whose ideas of the Milky Way he did not like at all. Shapley once wrote to van Maanen that his measurements had made universe smaller but Shapley’s own Milky Way greater.

In his autobiography Through rugged ways to the stars (Scibners, 1969, pp 80-81) Shapley summarises the history like this:

"Later I too recognized that van Maanen´s measurements were wrong. Knut Lundmark came over from Sweden to go through the measuring of the rotations of the galaxies, and he could not verify van Maanen´s figures. But he was a gentleman; he did not want to critizise them publicly. When I found it was a false trail I switched immediately to the truth; I have been complimented more than once on that since. Curtis also yielded pretty soon on the scale of the universe."

This is the HTML version of van Maanen Page 1
To view this content in Flash, you must have version 8 or greater and Javascript must be enabled. To download the last Flash player click here