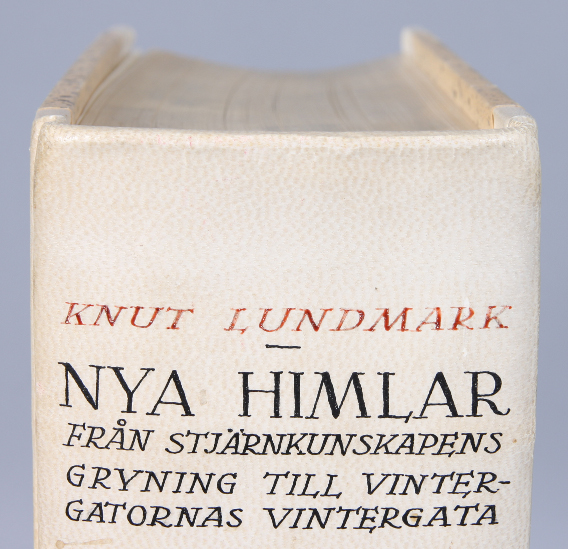 Från kaos till kosmos: några utdrag ur den astronomiska världsbildens utvecklingshistoria (1934) ["From chaos to cosmos: some excerpts from the development history of the astronomical conception"]

Livets välde: till frågan om världarnas beboelighet. Part 1 (1935; ["Life’s dominion: To the question of habitability of the worlds"] the second part was never published)

Solförmörkelser förr och nu (1945), ["Solar Eclipses in the past and now"] 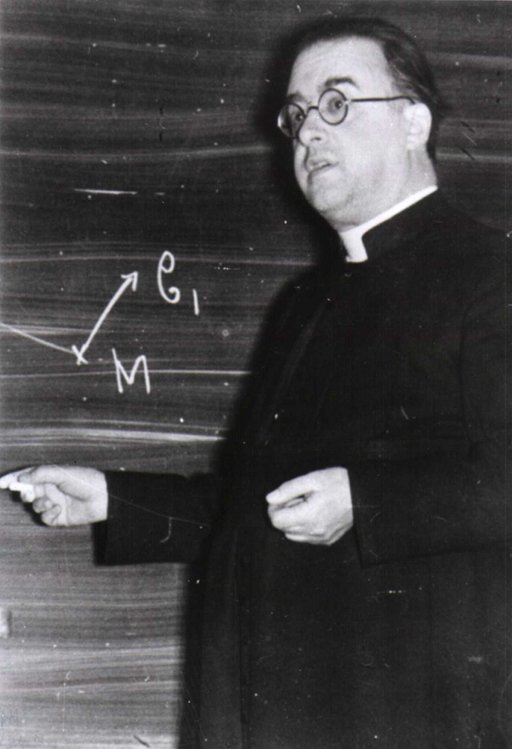 His magnum opus was printed during World War II with its paper rationing etc – Nya Himlar (1943) ["New Heavens"], published by Nordisk Rotogravyr and dedicated to his wife Birgitta.

This mighty work in a numbered folio edition (500) – including lots of beautiful illustrations, several in colours – describes on almost 800 pages the historical evolution of astronomy up until the fight about the nature of the galaxies, where Lundmark of course touches on his own pioneering role.

Among owners of this book were the King of Sweden as well as the then prime minister Per Albin Hansson and other celebrities.

As an example of Lundmarks own style and tone, we here publish some lines with among other things the memory of a meeting with George Lemaître – Lundmark could already then, in 1943, confirm what later astronomy historians have affirmed, that Lemaitre was onto the expansion of the universe before Edwin Hubble.

"Meanwhile, this escape of the island universes from the observer had been predicted as a relativistic phenomenon by Louvain professor G Lemaître.

The story of his discovery is extremely remarkable and shows, unfortunately, that it certainly is not always so certain that a work is immediately recognised by its inherent power and its inalienable value.

At the I.A.U General Assembly in Leiden in 1928, the author met a young, sympathetic abbot, called Lemaître, who was very interested in the issue of nebulae motion. He had shown that Einstein's field equations allowed a simple solution different to the two that Einstein himself and de Sitter had presented. According to Lemaître's solution, the universe expanded linearly and thus the distant galaxies must exhibit very large red shifts in the spectra.

Since the author was not sufficiently acquainted with the theory of relativity to be able to assess the value of his effort, Lemaître was referred to Eddington and de Sitter. Admittedly, the bibliographically very fine original investigation had been sent to them, but for some reason it was not noticed. Only a few years later, when Eddington entered this area and Lemaître pointed out his effort, Eddington reprinted L's thesis and emphasized the importance of it.

When we met at the next I.A.U. in Cambridge, Lemaître did not have to adhere to astronomers by the author's magnitude, because then he was one of the leading names. Rarely have we seen a well-deserved world fame reached so quickly.”

Lundmark participated as co-author in a number of extra-scientific books. Perhaps most surprising is his contribution, the very last, to the book Vad Kristus lärt mig (What Christ taught me) (Nature and Culture, 1957). Lundmark's religious beliefs originated from a poor home, which was strongly Lutheran, spanned to the scientist's agnosticism and, finally, to the older scientist's insights into the deep mystique of the existence. He would have liked the new theories of multiverse.